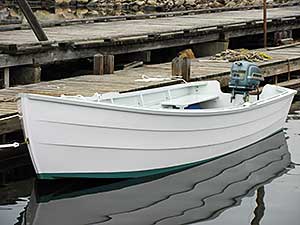 At the WoodenBoat Show in Mystic, Connecticut in 2009 we had Spartan’s recently completed dinghy as an in-the-water exhibit. A gentleman came along, admired the dinghy and struck up a conversation. During the course of the conversation it became evident that this gentleman had more than a passing knowledge of boats and their history, and eventually he asked if we had ever heard of Gideon Manchester. As it happened, Mr. Manchester's boats have fascinated me since I first saw one of his 18-1/2 foot vee-bottom skiffs with a friend aboard in the mid-1970s. With moderate power (28 hp), this skiff was making smooth headway into a considerable chop, riding fast, level, and comfortably, obviously not bothered in the least by the chop and breeze. Subsequently, I made other acquaintances with similar boats and similar results, and eventually was given a series of photographs of one of these boats under construction in Mr. Manchester's backyard shop on Jackson Avenue in Mystic circa 1954.

Over the course of the next year or so, our gentleman friend visited the shop with increasing frequency, and eventually brought three small photos of a 14 foot flat-bottomed skiff which he had purchased new from Mr. Manchester, also in 1954. I was asked to develop a set of lines for a 16 foot boat from the photos, and if they looked like the boat that he remembered, we would build it. After a few revisions and three different half-models for study, Gideon M is the result.

When Mr. Manchester was building boats for the livery businesses in the local area, the boats saw hard use and were not expected to last forever. They were built quickly and sturdily with local cedar and oak, and assembled with galvanized steel nails, which in our salt water environment have a useful life of about 15 years before galvanic corrosion takes its toll. Gideon M was intended to be used for a season by its owner, then donated to Mystic Seaport for use in its Boat House activities. Wishing it to have a long and useful life, the decision was made to use copper and silicon bronze fastenings in place of the galvanized steel of Mr. Manchester's day. Similarly, all components of the boat were painted before assembly, which would have been too time-consuming for a livery boat built to a (low) price, but which makes for a much more long-lived boat in the long run. She (he?) is planked with Atlantic white cedar, with white oak transom, stem, chines and frames. 16 feet overall, 5' 3" beam, 2" draft.