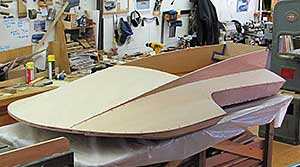 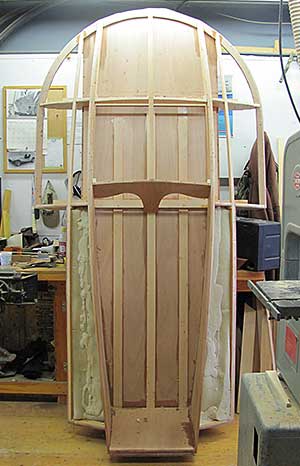 This group of boats started out as a lark, and has remained so pretty much ever since. Our shop’s next-door neighbor is JP, John Periera Jr. of PMW Marine Repair, outboard motor mechanics to the stars. He came running in one morning after surfing the web the night before, and announced that he had ordered plans for a boat that he wanted us to build. Soon enough arrived the plans for Glen-L’s Tiny Titan, an 8 foot plywood hydroplane. After studying the plans, we agreed upon a price and were given the go-ahead to build whenever it became convenient. JP is nothing if not enthusiastic, and not one to hide his enthusiasm for something that he thinks is fun, so before long one of his employees and our marina-owning landlord had each ordered boats so JP would have someone to race against.

The bill of materials for the boats specifies 2-1/2 sheets of plywood, so if we ordered materials for just the three bespoke boats, we’d have had a leftover half-sheet. Throwing caution to the winds, we ordered material for four boats, and they were built over the winter of 2010-2011. The Red Dart shown here is our spec boat, and at this writing is available.

The boats are built of Lloyd’s certified Okoume marine plywood over a Sitka Spruce framework, all glued together with WEST epoxy and fastened with silicon bronze screws as well. They are suitable for operators weighing less than 150 lbs. and will carry outboard power to 16 hp, with which it is reported that speeds above 50 mph can be achieved.