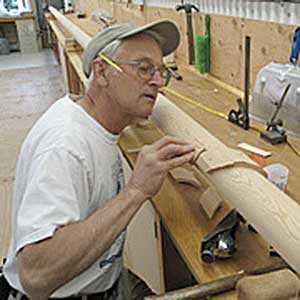 Bill Mills began learning his craft at a young age in the boatyards in and around Rowayton, Connecticut. After moving to eastern Connecticut in 1974, he worked first at Mystic Wharf, which was absorbed by the adjacent Mystic Shipyard. He left Mystic Shipyard in 1980 to assume a position in the Small Boat Shop at Mystic Seaport, assisting the late John Gardner as an instructor in boatbuilding. In addition to his teaching duties, he was also involved in taking the lines of several vessels in the Seaport’s collection and making lines and construction drawings of these vessels. After five years at the Seaport, he was recruited for the position of foreman of the woodworking and paint staff at busy Dodson Boatyard in Stonington where he remained for twenty years. During this time, in addition to his duties at the Boatyard, he has been a featured speaker at the Herreshoff Marine Museum in Bristol, RI, the International Yacht Restoration School in Newport, RI, and for the Noank Wooden Boat Society. He has made custom hardware and fabrications and served as a consultant for numerous construction and restoration projects by other respected builders in the area. Bill’s personal boat is a “Rozinante” ketch. 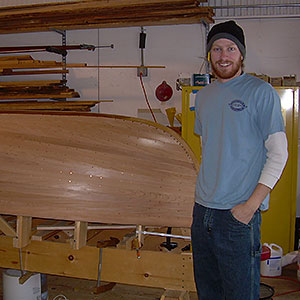 Emery Jackson: When we finished Spartan's spars in the spring of 2007, Ben Philbrick decided that it was time for him to change his focus after a long and productive career in boatbuilding and restoration, and he left to pursue his developing interest in alternative energy sources. Fortunately, a few weeks later a young man came to the shop looking for work, having heard that there might be an opening. That was the beginning of an enjoyable relationship with Emery Jackson. Emery has considerable schooner sailing experience with several long passages and extensive day charter work under his belt. He graduated from the intensive boat building and restoration curriculum at the International Yacht Restoration School in Newport, Rhode Island with the class of 2006, then went to Florida to assist in the completion of the 123' schooner Mystic. When Mystic came north after completion, Emery moved back to southeastern Connecticut. We had just been given the job of building spars for the three boats of the Herreshoff Buzzard's Bay 30 class which were being restored, and Emery soon displayed an aptitude for the kind of work which we are so proud of, along with a personality which makes it a pleasure working with him. As you peruse the projects on this website, it is Emery's talented head and hands which have built many of them. We are indeed fortunate to have him as a vital part of the shop.