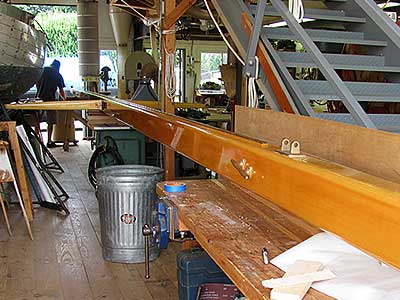 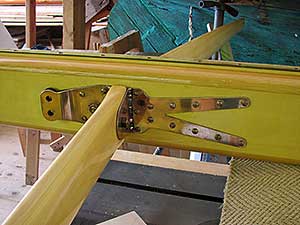 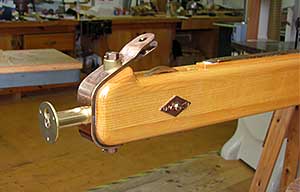 Above: Details of Little M's spars

In the spring of 2006, as Ben Philbrick and I were nearing completion of the sloop Patience, Ed Mc Clave of MP&G LLC came to us with an interesting proposition. It had become clear that the NY 50 class sloop Spartan had finally been sold, and that MP&G had been selected as the lead shop for her restoration. Ed brought with him a copy of the Herreshoff Manufacturing Company spar plans for the 50-footers, and asked if we would be interested in building new spars for Spartan. The brief was that they would be built hollow, of eight tapered staves of Sitka Spruce as the Herreshoff plant would have built them, with the only difference being the use of epoxy adhesives for assembling them instead of the hide glue used in 1912.

We built every spar for the boat with the exception of the 93' mainmast, which was too much of a stretch logistically for our 50' shop. Upon seeing some of Spartan's completed spars, the owners of the three Buzzard's Bay 30 class sloops which were then being rebuilt at French, Webb & Co. asked us to undertake the construction of the spars for those three boats. As with Spartan, we built everything except the mainmasts, which were beautifully done by French & Webb's crew. When French, Webb & Co. received the contract to build the Aida replica Little M, they asked us to design and build the spars and related hardware for her as well, which we completed in the summer of 2010.